Founded in 1994, HAÏTI FUTUR aims to create quality education and to support entrepreneurship in Haiti while promoting Haitian culture.

Since August 2010, Haiti Futur’s work has been geared toward Digital education. This program aims not only at spreading digital classes to 500 classrooms in Haiti, but also at training teachers, and creating course contents in Creole and French.

Haiti Futur is composed of 3 organizations: one in Haiti, one in the US, and one in France.

To promote Education and Entrepreneurship in Haiti in the long term

To give greater importance to exchange instead of donation

To enhance Haitian Culture, Art, and Handicraft, and promote them in France.

Our team in France is managed by the Founder and President of the association, Mrs. Josette Bruffaerts-Thomas who is supported by a team of civic-service volunteers and our members, as well by Haitian students who benefit from the Valencia Mongérard scholarship. The team has about 400 members and 50 very active volunteers.

In the US, it is Alice Bonhomme-Biais, who is President of Haiti Futur US, and who is in charge of all the activities of the association.

Last but not least, Haiti Futur has a strong presence in Haiti but does not have an office. This group is composed of young French volunteers who are in Haiti for one or two years and who work closely with service providers that are trained by Haiti Futur in order to supervise and coordinate our work on the ground (i.e. Projectors’ installation, training and follow-up of teachers, rehabilitation of schools). 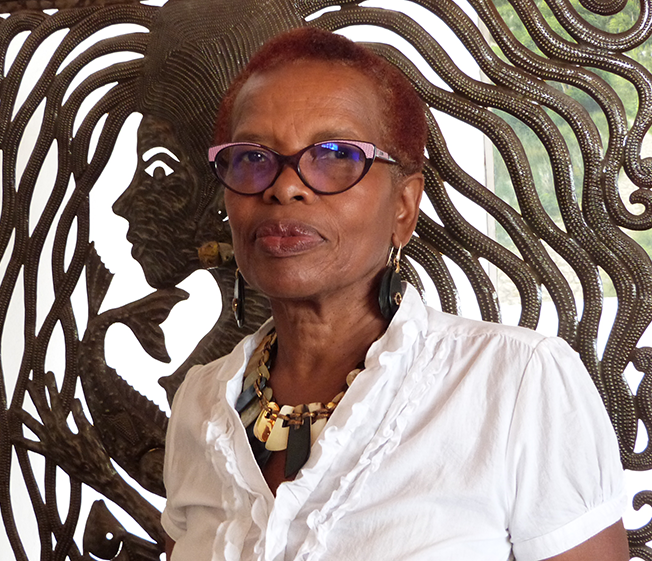 Mrs. Bruffearts-Thomas was a Teacher, a Consultant, and a Coach in Haiti and in France. She is the President of Competitive Intelligence Management (CIM), a Consulting Firm in Paris . She is also the President of Haiti Futur, an association dedicated since 2010 to the improvement of education through digital technologies and entrepreneurship in Haiti as well as promoting Haitian Culture in France. After graduating from the Teacher Training school of Elie Dubois and from at the National Institute of Higher International Studies (INAGHEI) in Haiti, she continued her studies in France at the International Institute for Senior Civil Servants and at University Paris XI.

Back in Haiti, she worked at the Ministry of Agriculture as Director Human Services. A few years later, she specialized and obtained her MBA in Economic Intelligence Watch and in Coaching and Team Building. She later worked to train and advise 50 women entrepreneurs in Haiti. In addition to her consultant missions with local organizations, she also taught Economic Intelligence Watch in several universities and Graduate Schools in France such as Paris Dauphine, Polytechnic College, the Conservatory for Arts and Crafts, and the Catholic University of Angers.

Mrs. Bruffearts-Thomas is a member of GRAHN France and a member of the Board of Directors of the Collectif Haiti de France which regroups 80 Franco-Haitian organizations.

Black Women Leader Award from the European Association of Women entrepreneurs at UNESCO (2004).

Alone we go faster but together we go farther. However, we need to go faster and farther together!